Mini-Cam’s overseas success during 2016 has seen it win an international trade award.

The company won the international company of the year accolade for businesses with turnover of up to £15m at Insider’s North West International Trade Awards. The judges said Mini-Cam has demonstrated a ‘spectacular level of innovation’ as it pushes the boundaries on research and development and takes market share from established competitors abroad. Mini-Cam was presented with the trophy at a dinner held at The Lowry Hotel in Salford. 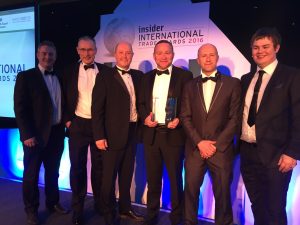 The company, which is celebrating its 25th anniversary this year, has seen international sales surge during 2016 to 48 per cent of overall turnover, up from 41 per cent in 2015. Strong growth has come in the United States, the Middle East and Europe, while the firm has also entered new export markets in China and Central and South America. Mini-Cam, which is backed by private equity firm LDC, now has a presence in 40 countries through a network of dealers. The firm’s heavy emphasis on innovation has seen it launch key additions to its product ranges this year – the SOLOPro+ pipeline video inspection system, the CRP90 Proteus Crawler and the CAM028 Pan & Rotate Zoom Camera.

Managing director Nigel Wilson said: “We are absolutely delighted to win this award. We have a great team here at Mini-Cam and it’s nice to receive this kind of recognition, which reflects the hard work that has been done so far. “We are all really looking forward to 2017 and expanding our international footprint even further.”

Chris Wright, investment director at LDC in the north west, said: “This has been a landmark year for Mini-Cam. Not only has the business experienced exceptional growth, it has continued to invest in its manufacturing facilities, launch a number of innovative products and expand into new overseas markets. The business exemplifies British manufacturing at its best, and this award is a credit to the hard work of Nigel and his team. With a continued focus on research and development, there is no doubt Mini-Cam will continue on its upward trajectory and we look forward to supporting the team as they continue on this growth journey.”

Subscribe to learn about our latest products, services and updates.